Today's photo is a shot that I took over this past weekend during a quick visit to Ashtabula, Ohio.  I was planning to get a couple of covered bridge photos a few weeks ago during a trip up to Pennsylvania, but plans did not come together and that trip got pushed back a few weeks.  Fortunately I had the opportunity to get some of the covered bridge photos that I wanted, but in a location that I did not think I would get any!

Ashtabula County is about an hour east of Cleveland, and is not too far from Interstate 90.  I had heard that northern Ohio had some excellent wineries, but I was not aware of the covered bridges in the area.  As it turns out, Ashtabula County is home to a whopping 18 covered bridges, including the longest covered bridge in the United States, the Smolen-Gulf covered bridge, which is 613 feet long!  I managed to get a few photos of that bridge too, but I liked this bridge more and decided to work on this photo first.

The Harpersfield Covered Bridge was apparently the former longest covered bridge in the US, and is interesting as an additional metal span was added after a flood washed out part of the river bank and, rather than adding a covered addition to the bridge, the metal span was added and attached to the covered bridge. There is a nice park area on both sides of the bridge, where you can walk, fish, and even splash around in the Grand River if you so desire.

I took this shot with my Canon S100 (I did not bring my "big" camera on the trip as I was not sure that I would have that many photo opportunities, boy was I wrong!).  I balanced it on a rock in the river and took the three bracketed shots.  I thought about taking the leaf in the middle right portion out of the shot, but decided to keep it in because it shows just how low to the ground the camera was and how large the bridge actually is.  We only had a chance to see 3 of the bridges in the area (I would like to see & shoot all of them eventually, maybe put together some sort of 18 part series!) and this was by far my favorite.  The setting was great, and the small waterfalls in the background I think really accentuate the photo nicely. 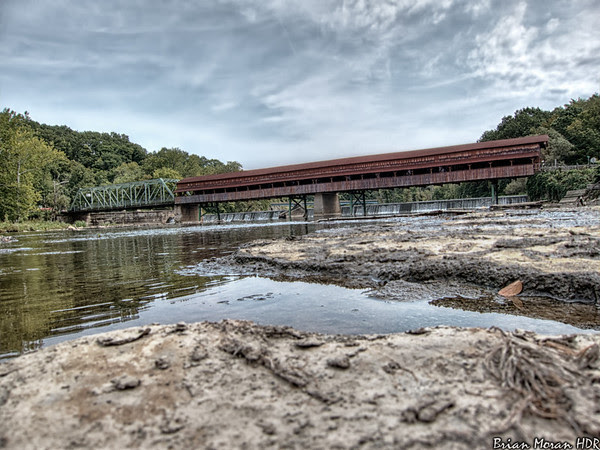 Please feel free to click on the photo above to view it in various sizes.  Clicking on the photo also takes you to my online gallery, hosted over at smugmug, where you can browse this (and other) photos that I have posted.  If you enjoyed viewing this photo, please take the time to leave comments and/or feedback below.  Please also feel free to pass the link of this photo on to others if you so desire.  Thanks for stopping by!!
Posted by Brian Moran at 9:27 AM

My Most Popular Posts